Read our statement on the loss of girls' autonomy and sign our pledge to protect girls' rights globally! 🌎

In Conversation With Chelsea VonChaz

Discover how the founder of Happy Period, the “first Black menstrual movement” is on a mission to end period poverty (Hint: It involves education, advocacy & access!)

In America, nearly one in five girls have either left school early or missed school because they did not have access to period products. The lack of accessibility to menstrual care due to economic, social, cultural, and political barriers is known as period poverty. As of 2019, this is a problem nearly two-thirds of low-income women in the United States have been experiencing.

In a survey conducted by U by Kotex for Period Poverty Awareness Week, they noted that nearly a “quarter of Black (23%) and Latina (24%) people with periods” agreed that they struggled to afford period products in 2021.

Another survey conducted in 2015 on transgender lives in America, revealed that trans individuals were “more than twice as likely to live in poverty and three times as likely to be unemployed as the general population.” These economic difficulties significantly contributed to the inaccessibility to proper menstrual care, if any at all.

Indigenous menstruating people also face similar financial hardships, a result of “few jobs and few commercial businesses,” which prevents them from accessing quality products due to increasing costs – prices rose nearly 8% to 10% in the last year.

“I’ve always been the period girl,” said Chelsea VonChaz, founder and CEO of Happy Period, the “first Black-led menstrual organization focusing on menstrual health education, advocacy, and access.” “I’ve always been comfortable with periods so, it’s natural to me. But I think seeing how no one else around me, in my opinion and visibility, had that same comfortability, or were being shamed [for having their period], made me mad.”

“I was upset about how shelters and transition homes don’t have to legally allocate any part of their budget to provide free pads and tampons, and [other] things to people that they serve,” said VonChaz.

Happy Period is one of the first Black menstrual movements focusing on period education and providing people – specifically Black, Latinx, and indigenous communities – with safe period products and education. “I got my period talk when I was nine and I got it from several people including my [fifth grade] teacher Miss Lucy Jackson,” said VonChaz. “She gave us a special hand signal to raise our hands when we had to go to the restroom and she had a special drawer with pads.”

I think seeing how no one else around me, in my opinion and visibility, had that same comfortability or were being shamed [for having their period], made me mad.

VonChaz recognized that this experience was not universally shared with her peers and continues to notice the taboo nature of these conversations in a classroom or family situation. She was inspired to pivot her company’s initiative from houselessness to youth menstrual education after parents and schools asked Happy Period to donate supplies to support their students.

Since the pivot, the company has also piloted a menstrual vending machine called a PPE machine, or period protection essentials machine, which dispenses a menstrual pack including pads, tampons, liners, and wipes. The transportable machine has found a home in different locations across California, including the Shields for Families Housing center in Compton, an outdoor Juneteenth event in Los Angeles, and local schools in Los Angeles County.

Continue scrolling to find out more about Happy Period and Chelsea’s journey to end period poverty. 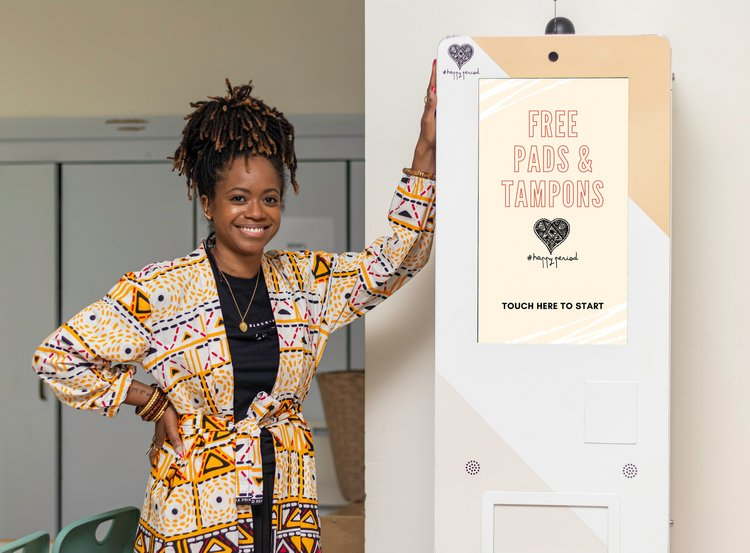 Why Did You Start Happy Period and What Are Some Of Your Goals?

Chelsea: We are the first to create our own curriculum and content that actually represents the people that we serve. We’re all about representation. We are tired of the menstrual equity movement being whitewashed and led by a majority of white women or white feminists. We are the first to stand alone as an organization that is strictly for people of color, [and] people who identify as Black, Indigenous, and Latinx. We are also focused on being inclusive to the folks that are underserved. We provide our services to folks who are houseless. We also provide our services to folks who are sex workers and homeless sex workers. We also help out folks who openly identify as transgender men or transgender boys and this is something that we are kind of criticized for but it’s interesting that people have this skewed idea of what someone who’s houseless should look like or how a sex worker should not be served a certain way. We never really believed in that and we noticed that many of the other organizations that have initiatives providing period products [did not admit] to serving sex workers as well. That is kind of a big deal for us but as far as now, we’re solely focused on educating people about menstrual health and also providing them access to safe period products.

Can You Explain Your Flow Program More?

Chelsea: We’re educating on what menstruation really is. We talk about how to track your period symptoms, introduce self-care methods like what period products [students] can use, what options they have when it comes to products, and ways they could treat pain. 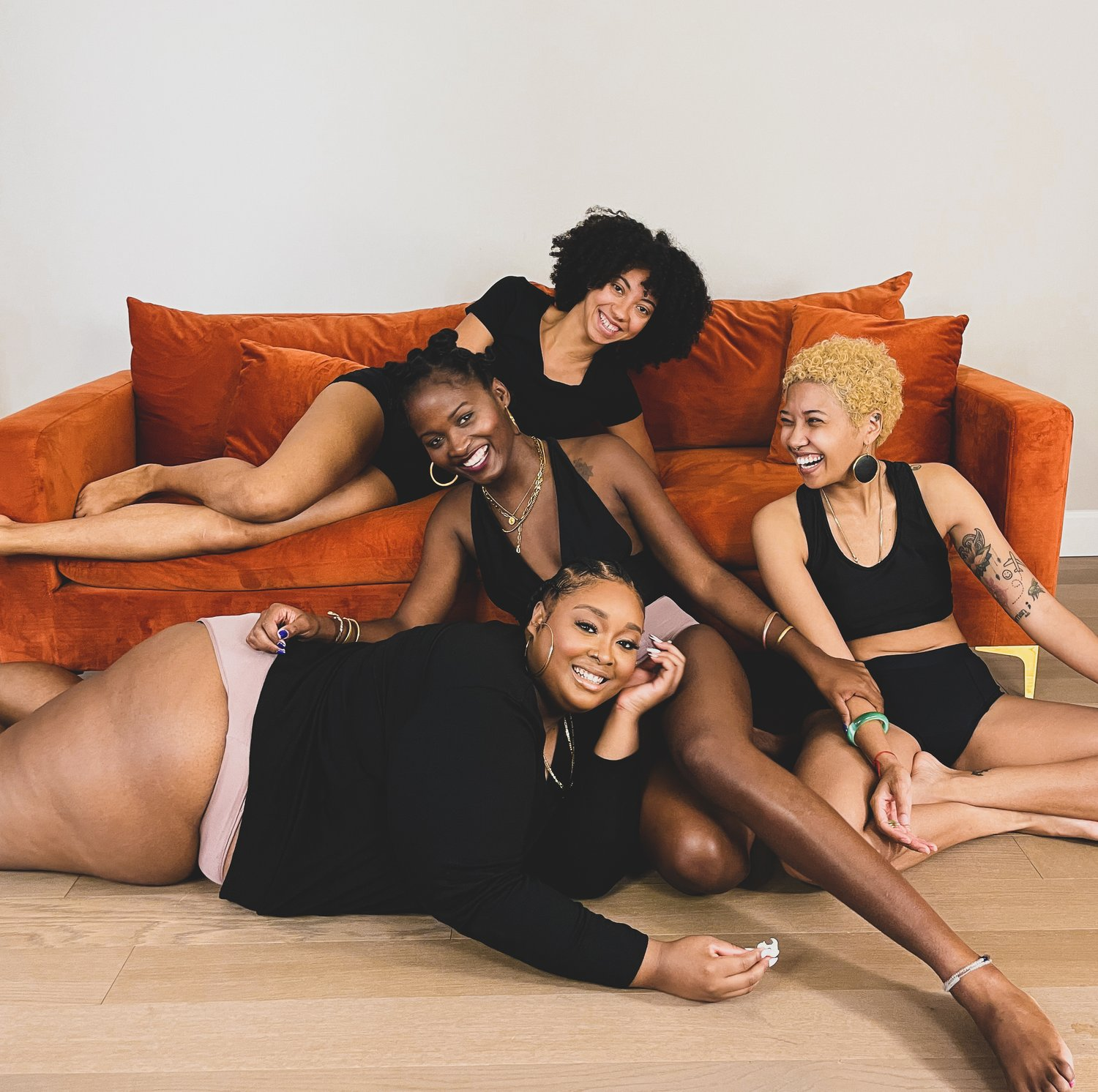 What Are Some Racial, Gender, and Economic Discrepancies In America When It Comes To Menstrual Education, Care, and Accessibility?

Chelsea: The main thing is a lack of accessibility. There’s no safe space for folks to just talk about their periods. There is no body literacy. So folks don’t know what ovulation is or how it works, how to track their periods or to avoid pregnancy. There are so many layers to why that is but it’s ultimately linked to racism. It’s also linked to a lot of intergenerational and generational trauma, and not having any type of menstrual care. This post-trauma is linked to us as a collective diaspora being enslaved and not having any type of support to heal from that, and also in real-time, experiencing racism [and] being discriminated against. So let’s connect that to a woman or someone who has a uterus who has been told that having a period is dirty or that having a period means they’re unclean. They see it in their communities. They’re shunned away to huts [or] there are no pads for them in restrooms. So everything around you [is] literally telling you that you should be silent about your period, [and] that you should hide it. It’s like, what do [we] expect?

What Are Some Other Examples Of Gender Discrimination You’ve Noticed?

Chelsea: Of course [there] are discrepancies that we see every day, like no free pads and tampons in public restrooms. [We] see an obscene amount of toilet paper [and] it’s kind of a slap in the face when you think about how a majority of restaurants actually have completely taken out paper towels, but now they’ve installed machines that air dry your hands. [It seems] air drying of the hands is way more valuable and way more important, efficient, and cost-effective than actually making sure that half of the human population has [menstrual] products that they can use. And then, of course, when there was an attempt to provide [menstrual products], it was still monetized. They decided to install dispensers [but] you still have to put in a quarter or up to [USD] $2 for one pad or tampon in a restroom, but there [are] still a lot of restaurants that still use a lot of paper towels, napkins, or toilet paper. Since the pandemic, they can also allocate their budget to include hand sanitizer. I’m not saying that we don’t [need this] but we also need free pads and tampons. It’s such a slap in the face. And then it’s [comes] to locations. We don’t have [period products] in airports, shelters, transition homes, schools, libraries, restaurants, [or] bus stations. Come on, we’re everywhere.

What Is Your Proudest Moment So Far?

Chelsea: I love when we do our Flow program workshops and after the event, we sometimes get feedback from parents because we invite them to attend [and] see what we’re talking to their kids about. I love when I receive feedback from a parent and they [say] this was amazing [or that they] really wish [they] had this when [they] were in high school. So many parents are just so embarrassed about this because they are still feeding into the taboo. There’s always going to be certain parts of it that are uncomfortable for the [parents]. We’re literally talking about our bodies. Of course, we’re going to get a little uncomfortable about something that the world is telling us that we shouldn’t talk about. So it’s really amazing [and] feels really good when parents say that [or] when a teenager says that this really helped. So I always love it when they are comfortable enough to say thank you but also give feedback [about being] more comfortable using a tampon [or] approaching [their] gynecologist for [their] first pap smear. It’s all worth it when there’s some type of feedback given or some type of praise.

Young activists can really help change the game [by] being a voice to speak up, to educate, and to show compassion.

What Can Young Activists Do To Combat Period Poverty?

Chelsea: I think that young activists can really help change the game [by] being a voice to speak up, to educate, and to show compassion. Because I think that’s something that [Gen Z] has that a lot of others [are] collectively missing, in my opinion. Get involved, get started; you really have to understand [if you] can be passionate about this specific idea or cause. We don’t need people jumping in and out of things. We have enough people being performative, we really do. We need folks that are really passionate about something to the point where it keeps them up at night [and] wakes them up in the morning–talking about the intersectionality of things, talking about what’s wrong about something and what could be made right, and presenting a solution to the problem.

This interview has been edited for length and clarity.

To learn more about period poverty, check out United Nations Population Fund for more information. You can also read more about combating menstrual stigma by understanding research published by The United Nations Entity for Gender Equality and the Empowerment of Women.

Finally, you can connect with other youth leaders & find resources to support your advocacy for Sexual & Reproductive Health, Rights & Justice in the Girl Up Community!

Give to Girl Up

Your support of our girl changemakers means Girl Up can continue to work toward a world where girls have equal value, opportunity, and the chance to reach their fullest potential. You can make a difference in the life of a girl by donating today.

How to Get Involved

All around the world, our network of a million supporters is mobilizing for gender equality. Will you stand with us?